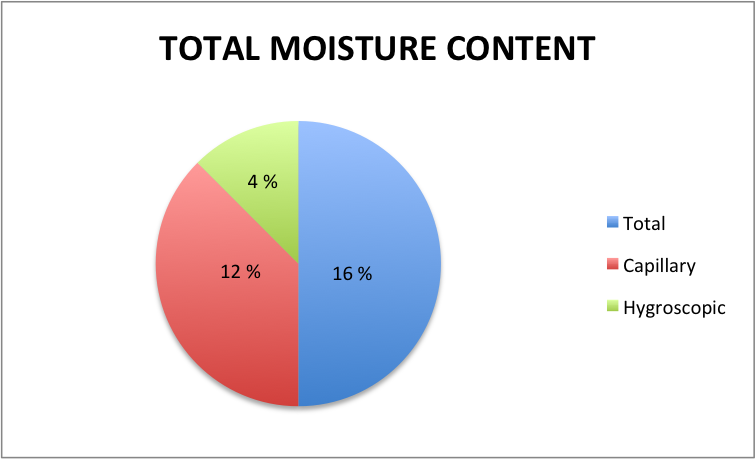 I own, and have used a calcium carbide meter on many occasions, and in my opinion when measuring moisture, when there is the potential for rising damp and hygroscopic salts this instrument can be massively misleading. I personally only use this when inspecting flood damaged buildings that are more of a modern construction that would unlikely to be contaminated from hygroscopic salts, from a genuine long term rising damp. The reason for this is because you can’t determine what is actually going on regarding the amount of moisture, and giving the correct advice to fix the issues.

What does this graph show? This is the most important part…. what it shows here, is that there is a very high amount of capillary moisture content, and a low level of hygroscopic moisture content. This is not what you would see on a genuine long term rising damp issue, as you would normally see more of a distinguished hygroscopic salt band. This property actually had issues with drains that I picked up with our CCTV drain survey. The samples were also chemically tested for nitrates and chlorides (hygroscopic salts), and none of any significance were present. All of the data points to drainage issues or possible leaks, and this couldn’t be observed from an onsite calcium carbide meter test. This property needs to be dried down with a Corroventa desiccant tented drying equipment, and the drain issues rectified.

Experience has shown that some building materials possess an HMC of up to 5% even without the introduction of salts from external sources. Although only a rough indicator, the 5% threshold does represent a reasonable general guide to whether or not some kind of remedial treatment is needed. This emphasises the importance of the difference between the HMC and MC measured on samples. It can also be useful to establish the MC and HMC of wallpaper, plaster and render, although drying plaster above 35 °C will drive off hydration water bound within the plaster and must be avoided. The figure of 5% at the base of the wall (the wall/floor junction) can be taken as an approximate guide to the presence of rising damp. However, even at this low level of moisture there can be a risk of damage to finishes and rot to any timber that may be in contact with the wall.