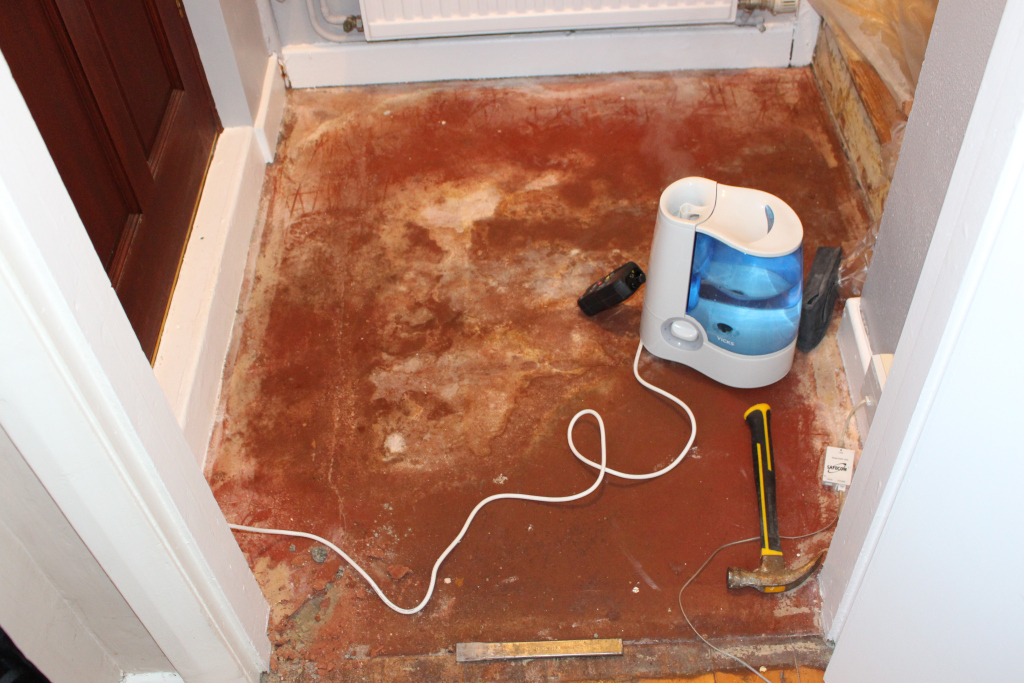 I recently had an enquiry regarding a small puddle on a hallway floor, which was presumed to be a penetrating damp issue. On quizzing my client it was also noted that this was mainly observed first thing in the morning, and also sometimes when there was no rain present during the night. I was asked to investigate, find the cause, and also offer a solution.

The property is a 1950’s semi detached house, of cavity wall construction.

The carpet had recently been removed from the front entrance hallway because it had become stained. The floor in question is red in colour, and when tapped sounded hollow in places, but consistently as in the sound of the depth, indicative of a floor type screed. Very high readings were noted when the floor was tested with a damp meter, all of this pointed to me that this is possibly a magnesite floor. With a typical magnesite floor you would expect very high readings using a damp meter.

Unfortunately on the day of the survey, the visible puddle wasn’t evident, but as somebody that has previous experience with this issue first hand I was pretty certain I knew what the issue was, it was just a question of proving it……

The client was contacted, as I needed to confirm asbestos wasn’t present in the flooring, I know of some cases where it is present in magnesite flooring. Tests confirmed there was none present, and a re-visit was booked – so on this visit I hoped to prove the issue, and also inspect the floor to work out repair costs.

First of all I used a humidifier, this is basically the opposite to a dehumidifier, this basically creates lots of humidity and can quickly exaggerate a problem so I can see an issue rather than presume. The area was tented off and the humidifier was switched on, being impatient I kept opening the porch door to see if water was pooling …it wasn’t! I knew it would take a fair amount of time, but in the end it took about 45 minutes for this to occur, unfortunately because of the amount of humidity I didn’t get the video footage showing it occur…I was gutted. 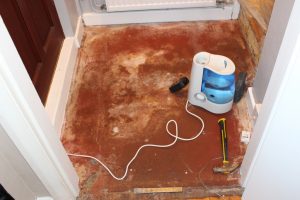 The below picture actually shows the water on the surface, although not a great shot! 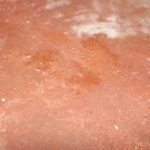 This shows the magnesite floor opened up, it was around 25mm in depth in the places inspected. 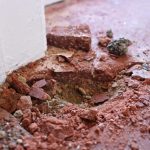 Now a layperson may wonder why the puddle occurred, and was it a condensation issue?

Condensation was definitely not the cause, this was completely eliminated using our equipment.

Now magnesite floors are basically very hygroscopic. Hygroscopic salts absorb water from the air; a good example is that of sodium chloride, common salt, which under humid conditions crystals become ‘sticky ‘clump together. However, there is an extreme of hygroscopic-deliquescent-where the salts absorb so much water that affectively they dissolve in themselves and thus we have a solution. The point at which deliquescent occurs depends on the particular salt. For example common salt is hygroscopic at 75% relative humidity but increased this to 85% plus and keep it there then it becomes deliquescent and therefore liquid. Once in liquid form the salts become mobile and can move away from their point of origin.

If you see this type of floor colour, think magnesite, this is the only colour I’ve personally ever seen. I’ve been told that in other locations that there is greens and brown. This floor in particular was very soft when poked, although some I have found are harder, when in better condition. When checking solid floors through carpet coverings on pre purchase surveys, if you get very high readings, you could put your client on notice, as the repairs can be very expensive especially if asbestos is present and it needs to be removed.

Also remember to get it tested for asbestos, this is a cheap process and has to be carried out.

The two below pictures show macro images taken of two different magnesite floors, as you can see the make up material is completely different. 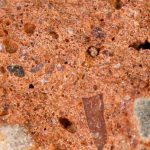 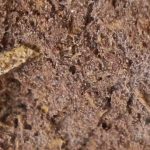 Tips for anyone reading this that has a damp issue.

None of these damp remedies would have actually fixed the issue.