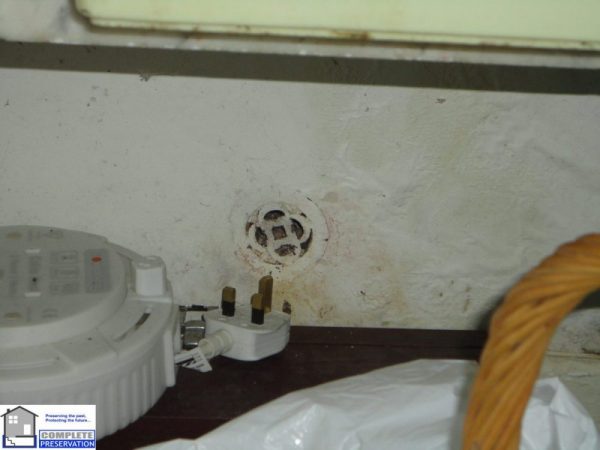 There have been various damp removing systems available over the years, and the British Knapen system is quite a controversial one to say the least. Knapen tubes were installed from around the early 1900’s.

From the advertising in the Knapen book

These systems are the result of many years research and experiments by Professor Achille Knapen of Belguim, and our now in such common and successful use on the continent, and have received such praise from scientists, Government, and Municipal authorities,  and clients alike, that  it is curious they have been previously so little known and practised in Britain.

With the formation or British Knapen Ltd, however, this is the fact is now remedied. With their staff, trained under the direction of Professor Knapen himself, and with the acquisition of the rights the British Isles and the Dominions,  they are now able to offer the benefit of their experience to architects, public authorities, and the public, you so frequently have to contend with these difficult problems. A number of successful installations have already been carried out in this country by the Company, which is now organised to execute contracts at any magnitude.

British Knapen ltd was formed, and are sole proprietors for the British Isles and the Dominions of the “Knapen Systems” for the cure and prevention of damp, and for the aeration of buildings by natural forces.

The Knapen System of aeration operates on very different lines to any other method. Instead of employing force to circulate the air – the fallacy of which method has already been demonstrated-this system utilises the services of nature and operates by persuasion alone, so that it’s object is attained without bother and at little expense. Mr Knapen theorised on a totally different hypothesis from that upon which most systems based, and, recognising that there air can be displaced laterally with the difference of only 0.5° C in the temperature, a perfectly effective method of aeration was devised,  which is not subject to the disabilities of the other methods. The advantage of this method lies in the fact that the temperature on two opposite sides the building always differs (due to different orientation) and as the colder side is naturally heavier, a steady pressure is exerted, which creates a movement of the air within the building. As one side was always colder than the other, the movement is automatic and persist indefinitely, any variations in temperature as the sun moves round merely altering the direction which their moves. Thus the most perfect continuous and natural aeration of the premises is assured.

In the Knapen  System, this lateral displacement of air is utilised by the insertion of rectangular apertures in the walls, these apertures being inclined at an angle with the horizontal to take full advantage of the external air pressure, and their arrangement is such that complete change of air is continually taking place throughout the building, every particle of foul air being expelled and replaced.

Three standard positions are adopted to the ventilators. One is located near the ceiling, to deal with the lighter elements, while another set of a place near the floor deals effectively with the heavier elements. A third set of medium-sized openings are arranged between the two to complete the system.

The apertures are protected internally by special adjustable grids so that during the cold weather when a draft or greater velocity is created the inlet can be decreased if desired. As a rule however no adjustment is needed.

The circulation is continuous, and persist day and night, year in and year out, without attention, the airflow is steady and is diffused in all directions, no current passes sufficient to cause discomfort from draughts.

It is calculated that one quarter of the cost of fuel consumed when ordinariy systems of ventilation are employed can be saved by the adoption of the Knapen system.  A comparison of the air taken from the buildings were the system has been installed, and from others where it has not been adopted, shows the difference of over 40% in the number of pathogenic microbes present in favour of the former. More striking testimony to the hygienic value of any system would be difficult to obtain. The presence of the apertures does not disfigure the elevation of the building as they are so inconspicuous has to be hardly noticeable.

One has only two talk to architects to learn how difficult problem is for them to solve. Until the introduction of the Knapen system no real remedy had been found. The effects of condensation are well-known. The decorative features of interiors are ruined by moisture which settles on the services, merchandise is destroyed by the continual dropping of water from the walls and ceilings of warehouses, while bathrooms laundries and factories suffering considerable discomfort and damage from the same cause. Condensation must not be confused with dampness. It is neither capillarity, nor absorption,  but is the automatic deposition of atmospheric moisture on cold services; quite simple matter. But a very difficult one to cure. Various remedies are employed which generally consist of lighted gas jets, hot water pipes or some other method of heating the air.  All these devices although apparently operating by warmth depends primarily on ventilators for the limited success, which proves conclusively that condensation can only be effectively combated by efficient ventilation.

The Knapen system has proved to be a really effective help in the problems of condensation. The circulation of air is so thorough and complete that suspended moisture is largely evacuated before it can be deposited on the cold services. This is no idle statement, and the British Knapen limited, asks nothing more than the opportunity to substantiate the claims in this respect. The system is successful because the problem is approached and dealt with scientifically and in accordance with the immutable laws of nature.

Effective ventilation has been achieved by the Knapen system alone. Start right, functions effectively and finishes its work to perfection. It needs no attention.

The success of the systems

The foregoing remarks maybe interesting theoretically, but the question maybe asked “Have the Knapen Systems proved then self and practice”?   The answer is best given thus:

“In Belgium they function in the Royal Palaces, the new palaces of justice of Termonde and Louvain,  in Churches, military buildings, it is, and even in workmen’s houses. In France and equally in museums,  historic buildings palaces and other buildings to mention. The town of Antwerp, since the war, regularly specifies Knapen aeration for its new schools. In England, though introduced so recently, installations have already been made in country houses, colleges at Oxford and Cambridge, hospitals and numerous other buildings.”

The systems have received high awards and honours. Obviously, therefore, they are not only of interest to the scientist by thoroughly practical and proven.

They should be in a short time now that the British Knapen Ltd is established in Britain be the recognised installation of damp prevention and aeration in the buildings of this country.

Britsh Knapen also produced other products which are listed below.

In addition to the Knapen anti – damp proof course for the permanent cure of capillary dampness, and the Knapensystem of horizontal

What I have learnt is that this Knapen system was designed and installed according to the advertising book I own as more of a passive vent system. This being that there were tube vents at the base of the wall, tube vents at high level on external walls, and tube vents through the internal dividing walls at high levels. I only thought there was one type, and that was just to stop rising damp.

In my opinion as a passive vent system there is no doubt this would lower the vapour pressure within a building, and would most definitely help with condensation related dampness, to what extent is unknown. Whilst I have seen many of these systems installed I have actually never seen just the ventilation one. The ones I have seen installed to stop rising damp have all failed miserably though. Most of the properties I have seen would of still needed lowering of external ground levels, and removing modern masonry paint at least at low level.

I would be interested if you have any interesting comments regarding this system, and have you got any pictures of the internal vents that can be closed?

When I get 5 I will post the stuff that Knapen have produced on the rising damp system, as it might be of interest to a homeowner, or a building surveyor.

The knapen system/siphon tubes look like the below images when installed in buildings.